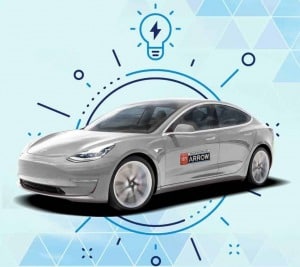 A Leeds taxi firm is to invest more than £5m in what will be the city’s first all-electric fleet of vehicles.

Arrow Cars, based in Horsforth, is to replace its current fleet of taxis with Tesla Series 3 vehicles in order to cut down on greenhouse gas emissions.

Arrow said it was making the move in response to consumer demand for sustainable travel and hopes to complete the move by 2024.

The firm had planned to invest in the emission free fleet three years ago but scrapped the plan after Leeds City Council bosses rejected its request that the vehicles be allowed access to the city’s bus lanes.

Daniel Graham, managing director with Arrow Cars, said: “Electric cars are not something for the future, this is actually happening now.

However, Arrow, which employs 750 drivers nationwide across five cities, has now decided to go ahead with the plan regardless, with the first Teslas to begin service from next month.

Daniel Graham, managing director with Arrow Cars, said: “Electric cars are not something for the future, this is actually happening now.

“We wanted to offer our customers something different from the diesel-guzzling cars. Whether it is our corporate customers, their clients or individuals, there is a push for everything to be more sustainable. This is not an insignificant investment.”

The Government has made a commitment to phase out all petrol and diesel cars, with the sale of combustion engine-powered cars and vans to end by 2035.

Mr Graham said he believed that the move from Arrow would lead to other rival firms following suit and investing in electric cars to service their passengers.
Currently, only so-called private hire taxis, or black and white cabs, can use the bus lanes in Leeds.

Mr Graham said that he and his firm remained frustrated at the refusal of the council to give them the green light to use the bus lane network in 2017, something he said could have contributed to thousands of emission-free journeys.

“We are not asking for something totally unreasonable or that is not happening anywhere else,” he said.

“Other UK cities allow electric vehicles into bus lanes. If you think about the number of other companies that would followed us that would have been thousands of emission free journeys.
“But it is great that Leeds is finally kicking off this process and all being well we will soon have a zero emission fleet. It is a lot of money but we have always invested as a firm.”

Tesla the business and the vehicles it produces are the brainchild of tech billionaire Elon Musk. Earlier this month it was accused of removing £6,000 ($8,000) worth of driver aid functions from a car after it was sold on the second-hand market.

The electric car maker remotely disabled two driver aid functions – Enhanced Autopilot and so-called Full Self Driving capability (FSD) – after the car had changed hands, despite advertising it as having the features.

A spokesperson for Leeds City Council said: “The council’s position is that bus lanes should be kept clear for buses to run efficiently and to time.

“This is a key element of our target to double bus use by 2027 through investment in improved public transport infrastructure.

“We would advise any private hire company to visit our clean air website at https://www.leeds.gov.uk/cleanairzone or contact our clean air team at cleanairleeds@leeds.gov.uk to look at the support available for converting their vehicle fleets ahead of the clear air zone being introduced.”

We use cookies on our website to give you the most relevant experience by remembering your preferences and repeat visits. By clicking “Accept All”, you consent to the use of ALL the cookies. However, you may visit "Cookie Settings" to provide a controlled consent.
Cookie SettingsAccept All
Manage consent

This website uses cookies to improve your experience while you navigate through the website. Out of these, the cookies that are categorized as necessary are stored on your browser as they are essential for the working of basic functionalities of the website. We also use third-party cookies that help us analyze and understand how you use this website. These cookies will be stored in your browser only with your consent. You also have the option to opt-out of these cookies. But opting out of some of these cookies may affect your browsing experience.
Necessary Always Enabled

Performance cookies are used to understand and analyze the key performance indexes of the website which helps in delivering a better user experience for the visitors.

Analytical cookies are used to understand how visitors interact with the website. These cookies help provide information on metrics the number of visitors, bounce rate, traffic source, etc.

Advertisement cookies are used to provide visitors with relevant ads and marketing campaigns. These cookies track visitors across websites and collect information to provide customized ads.

Other uncategorized cookies are those that are being analyzed and have not been classified into a category as yet.